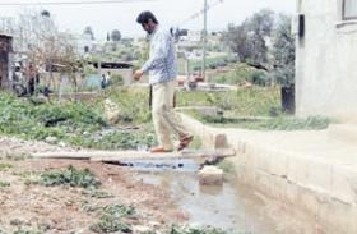 Jalboun village located in the far northern east of Jenin city, it is surrounded by three settlements, on the tops of the surrounding  mountains :  "Ma'ali Jelbua", "Malak Joshua,", and "Merav" settlement. In addition to that; the village was surrounded by the separation wall which has destroyed more than 2000 dunums of agricultural lands. Since the establishment of the apartheid wall on AL Jalbun land, the residents of the village were not safe, as the air, plants, soil, from the occupation practices that  aims at getting them to leave their land.
New Israeli encroachment was added to the residents suffer, after pumping  raw wastewater from "Merav", and "Ma’ali Jalbua’” settlements to the populated and agricultural area in the village.

Wastewater flows from these settlements to the agricultural and populated lands, leaving environmental and health hazards. Wastewater destroyed agricultural land and turned it into a source of diseases.

The citizen, Khaled Abu AL Rob (30 years), described his suffering caused by wastewater flow from Merav settlement: "it is not unbearable, life here like hell, wastewater destroyed our crops, polluted air and water".

He added: "Our area has turned into a big prison by wastewater flow from the settlements, the streets in front of our homes have been banned and difficult to walk because of the wastes, stench  smells, insects and mosquitoes which has prevent us to open windows of our houses"
He added: "In addition to that wastewater is saturated with chemicals that damaged our crops and burnt the agricultural soil.

Basma Abu AL Rob is suffering due to the contaminated wastewater flow from Merav settlement but in a different way she said: "It is not only stench smell or insects, which prevented us to sit in our home gardens, and even sleep during the night, it has become even more than hell , when the wastewater entered the rooms of our house. "
She continued: "it can’t be imagined what happened when wastewater flew into the house and damaged everything inside, she said: we tried for more than an hour with various ways to prevent wastewater flow to the house. "

Omar Henthawi uses wooden planks to cross to his house, which was surrounded by wastewater. He said: I spend a lot of time every day to find a way to keep my home from wastewater flow, but I failed every time, what was forced me to put wooden planks at the entrance of the house to be able for my wife and children crossing above to enter the house. "
He added: "I am preventing my children to play outside the house, lest they be infected by diseases caused by insects and contaminated water."

The source of this contaminated water is cattle farms in addition to the remnants of potatoes  canning factories in "Merav" settlement, the settlers clean up the cattle farms and factories and collect the water in the pools before pumping to the village.

The suffering of people in the village, especially the farmers who own land next to the separation wall does not end at this point, in many cases, the farmers are prevented from entering their land by Israeli army, and sometimes subjected to beatings when they enter their land because what Israeli called "security zone."

The villagers live a variety forms of suffering caused by the occupation’s practices against them, during the recent period, occupation forces have put  wild dogs at  the gates which were built on  sections of the separation wall , which had become a real threat to the citizens, especially children and the elderly.

The settlers did not stop disturbing Palestinians since the establishment of the separation wall, either leaving  stray dogs  or cows in the olive fields , or preventing farmers from reaching their agricultural land adjacent to the wall, or setting fire of the  olive trees.

Enter below the keywords for search