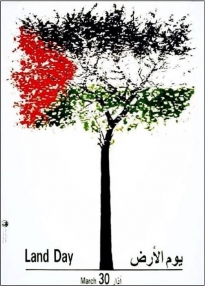 30th March, commemorates 41 years after the first Land Day, when thousands of Palestinians take to the streets in protest of the confiscation of thousands of acres of Palestinian land in the northern Galilee region inside the Green Line (1948). During the protest, six demonstrators were gunned down and killed by Israeli forces and over 100 were wounded.

Forty one years later, Palestinians are still defending their lands and protesting against Zionist expansionism, and massive Israeli land grabs, since 1967 Israel has confiscated more than 750,000 acres of land from the 1.5 million acres comprising the West Bank and Gaza. Furthermore, the ongoing construction of illegal settlements, and bypass roads, continuing violations of constructing apartheid wall leaving all Palestinians to live in 12% of historical Palestine, which is considered flagrant violation of all international conventions, particularly the Fourth Geneva Convention and international humanitarian law.

The Israeli occupation has not only replaced the indigenous population with 700,000 Israeli settlers now living in the West Bank including Jerusalem. It also has established and still establishing more outposts and settlement units without paying any attention to Security Council
Resolution 2334, which considered the Israeli settlement as "flagrant violation" of international
law and has "no legal validity".

We the Palestinian People continue in our right to defend our lands and our heritage and our right to liberation. Apartheid, which is what we live under, is the atrocious conglomeration of colonialism, racism, denial of self-determination, , and expulsion..

As in Palestine, we call on you worldwide to condemn the Israeli violations against the Palestinian land. and to decisively and effectively compel Israel to abide by the UN Security Council Resolutions, stop all land theft and cease all settlement activities on occupied Palestinian land.

Enter below the keywords for search